Founded in 1948, Greenwood Credit Union has a long history of providing high-quality financial services to residents throughout Warwick, Rhode Island. With more than 70,000 members and $600 million in assets, the credit union’s commitment to the financial well-being of the families, businesses and communities it serves continues to shine through more than 70 years later.

When the credit union’s contracts for core data processing, loan processing, mobile banking and bill pay all came up for renewal, President and CEO Frederick Reinhardt and Executive Vice President and CFO Joseph Lajoie had a decision to make: tackle the negotiations themselves, or turn to a trusted partner for help.

They had suspected they were overpaying because of how powerful and similarly structured the big core providers had become over the years, as well as the fact that they had never previously negotiated the contracts. In addition, the duo had heard stories of the larger vendors playing hardball with their clients. All of this provided enough evidence that they shouldn’t go it alone.

“We recognized that we didn’t have the experience to do that type of negotiation,” Reinhardt said. “We were just being honest with ourselves.”

Luckily, Lajoie had known JMFA Contract Optimizer’s National Director Kelly Flynn for more than a decade, and both were familiar with the company’s stellar reputation.

“We’d heard nothing but good things about JMFA. That made it a very easy choice for us,” Reinhardt said.

Once contacted, the JMFA team ran an initial assessment on the credit union’s contracts and projected $326,000 in annual savings could be negotiated. Greenwood Credit Union didn’t hesitate to move forward. 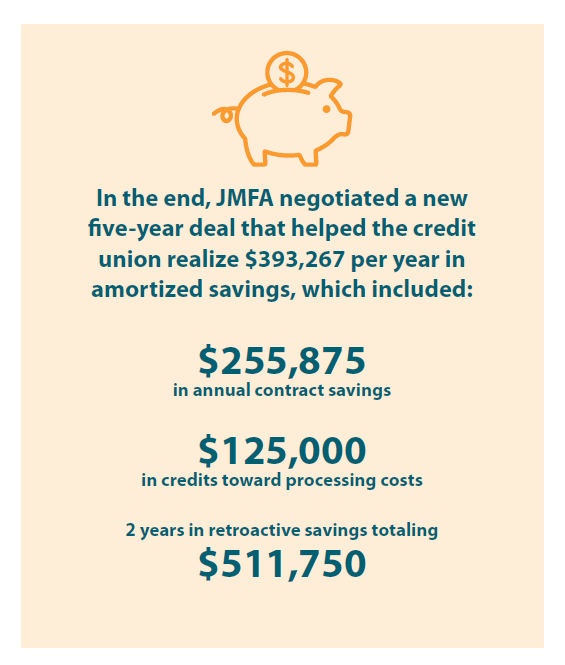 In the end, Soergel negotiated a new five-year deal that helped the credit union realize $393,267 per year in amortized savings, which included:

Yes—instead of having to wait two years for their current contract to expire, the new pricing was applied immediately, unlocking seven full years of significant savings for the credit union.

In addition to all of this, Soergel reviewed an existing proposal the credit union had received for debit and credit card processing and improved on it by $19,296, secured a $325,000 credit towards future technology investments, and made it advantageously coterminous with the other contracts.

Lajoie and Reinhardt were shocked at the numerous ways they could find savings. “The signing bonuses [offered by the vendor] were a little bit surprising to me,” Reinhardt said. “I just didn’t know those existed, to be honest.”

Other items successfully negotiated by Soergel during the process include:

·       Pricing for new services that could be added during the term, including online account opening

Though Greenwood Credit Union made the decision to work with JMFA Contract Optimizer a few months before the coronavirus crisis really hit the U.S., the negotiations finalized in a swift three months, right as businesses all over the country were ordered to close or move to remote operations.

However, JMFA still provided a smooth process amid the chaos, according to the credit union.

No Pain, All Gain

Lajoie and Reinhardt experienced what many so many others have come to realize after handing over the negotiation reins: it’s an easy process when you work with JMFA.

“JMFA handled everything. It really didn’t take much of my time at all,” said Lajoie. “It’s one of those things that comes up every four to five years and takes you away from what you’re really trying to get done.” Except with JMFA on their side, it didn’t, and the duo was able to focus on the other strategic initiatives on their plates.

“JMFA’s existing knowledge of the vendor made it very easy to work the deal,” Reinhardt added. “I can’t even imagine the number of hours we saved by turning it over to JMFA. It would have been unchartered territory for us to do it alone.”

The windfall will help the credit union offset the current financial implications of the COVID-19 pandemic, as well as protect future plans like hiring new employees and upgrading internal and member-facing technologies.

How does the Greenwood team feel about working with the JMFA Contract Optimizer team, now that the negotiations are complete? With more than $2.2 million in savings over the next seven years, it’s not hard to guess.

“On a scale of 1 to 10, it was a 10!” Reinhardt declared. “I can’t stress it enough. The JMFA Contract Optimizer group took the negotiations and ran, and we didn’t have to do any of the heavy lifting. We are deeply grateful for the help JMFA provided us.”

If you have vendor contracts coming up for renewal in the next 18–24 months like Greenwood Credit Union did, now is the time to begin negotiations to get the very best deal. Request a free appraisal to find out how much JMFA’s negotiation experts can you save.