CREDIT UNION SAVES MORE THAN EXPECTED– $3.2 MILLION, TO BE EXACT

With four branches and $359 million in assets, Baton Rouge Telco Federal Credit Union prides itself on keeping costs down and getting things done in-house. But sometimes, it pays to ‘have a little help from your friends.’ That’s what CEO Darryl Long discovered, and it ended up saving his credit union more than $3 million.

It all started amid breaks at a credit union conference, where another Louisiana credit union shared their contract savings success story with a Baton Rouge Telco employee. After hearing this trusted advice, Long realized JMFA could help his credit union negotiate its soon-to-expire debit and credit card processing contract.

Overcoming Initial Doubts
In the past, when a vendor contract came due, the credit union staff would review the renewal and once in a while get quotes from other vendors, then finish the deal themselves.

“I was a bit skeptical about bringing in JMFA,” said David Karisny, Senior Vice President and CFO. “We have a history of doing this ourselves, with some cost-saving success. But I also felt we were leaving money on the table and that we didn’t have all of the information needed to make the most competitive counteroffer.”

With that in mind, Karisny and Long enlisted additional expertise to explore their savings opportunities. “My goal was to achieve greater savings than we could on our own,” said Karisny, “and have JMFA bring more creativity to the negotiation process than we knew how to.”  The credit union wanted to make sure they were getting the best deal compared to their peers—and JMFA’s extensive knowledge of what vendors charge other credit unions for services gave them the best possible leverage to do so.

The initial appraisal projected an annual savings of $77,628 for the credit union’s debit and credit card processing contract, a pleasant surprise to Long and Karisny. However, they would soon learn their future included more savings than they could have imagined.

What began as one contract negotiation turned into a three-contract project.

Debit and credit card processing
The JMFA team provided full support for managing the process—they issued requests for proposals (RFPs) with rates the vendor needed to meet to win their renewed business, the proposals were reviewed, and counteroffers were made. After looking at the offers for both five- and seven-year terms from its current vendor, the credit union decided on the shorter term.

Results of the negotiations identified $113,088 in annual savings for the credit union, along with a $75,000 signing bonus AND 11 months of retroactive savings valued at $103,644. Baton Rouge Telco also walked away with no annual price increase for three years, free tickets to the vendor’s annual convention, a favorable early termination schedule and competitive deconversion fees.

If that were the end of the story, everybody would have been satisfied. On the contrary, JMFA Contract Optimizer’s National Director Kelly Flynn had also pointed out early on that the credit union was missing out on major savings by not having a card brand agreement in place with its vendor. Needless to say, JMFA was on it.

Card brand agreement
To get started, calls with major card brands were promptly set up so the credit union could hear their value propositions. After discussing the proposals, the credit union preferred staying with their current brand unless the other vendor offered significantly more to switch. As a result of additional counteroffer negotiations, more substantial deals were achieved.

The credit union ultimately chose to stay with their current vendor based on years of positive experience. Plus, they would get to avoid going through a conversion and switching out member cards.

How much money had been left on the table by not having this agreement in place? The new negotiated contract will earn the credit union $1,721,000 over ten years, including a signing bonus of $280,000, funding to upgrade cards to “contactless,” and marketing support. 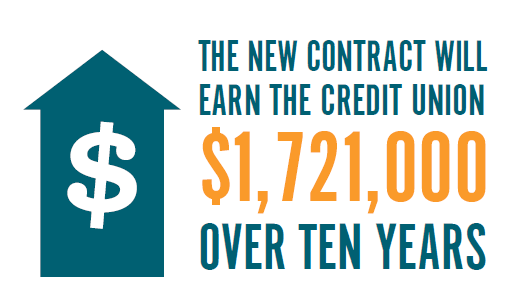 Long was delighted and appreciative to uncover this new opportunity. “I have a close relationship with other credit unions, and I think a lot of them don’t know about card brand agreements, either. Without JMFA, we would still be in the dark about it.”

As these negotiations wrapped up with unprecedented savings for Baton Rouge Telco, one more contract had an expiration date looming—and the credit union knew JMFA could work its magic again.

Digital banking
For the third and final contract of this project, set to expire in approximately 13 months, Long and Karisny already knew they wanted to stay with their current digital banking vendor and have JMFA handle the negotiations. The Contract Optimizer team presented the credit union with an appraisal report, including projected annual savings of $104,610. Soon after, negotiations began they concluded in record time with new lower rates taking effect for a full year of retroactive savings.

Baton Rouge Telco will now be able to provide a mobile suite of services through a single app—a huge convenience to members that not all credit unions offer. Having multiple channels to conduct business outside of the physical credit union is especially valuable now that more people have shifted to mobile banking during the pandemic.

New products and services which the credit union will be implementing included:
·       Card controls, for members to turn their card on and off via their app
·       A new remote deposit platform
·       Upgraded services to enhance marketing and cross-selling efforts, including the ability to execute data-driven campaigns

The new contract represents a win-win scenario for both the credit union and the vendor. With the additional savings, Baton Rouge Telco can now reinvest that money with the vendor in new services they’d already planned on adding, without making a dent in its operating budget.

All in all, JMFA found Baton Rouge Telco Federal Credit Union $3.2 million over the course of the three contracts.

“The savings realized was significantly higher than what we’d seen in the past when we negotiated with vendors ourselves,” said Karisny. “The debit and credit card signing bonus was nearly triple what we got last time when we did the negotiations in-house. Plus, the branding contract was a huge benefit we were totally missing out on.”

The proof is in the savings
Before negotiations began, Long admits to having some doubts about whether JMFA would try to convince him to switch to another vendor. “That never happened,” he said. “I never felt any pressure to go one way or another; JMFA just advised us to go with the vendor we felt most comfortable with.”  This vendor-agnostic approach is precisely why JMFA Contract Optimizer is able to get the absolute best deals for its clients.

Karisny also had to overcome reservations about outsourcing the negotiation process. “We’re a relatively small credit union, and our staff wears a lot of hats,” he said. “We usually like to do things ourselves, but we’re spread thin—even more so since COVID-19 came along—and bringing in JMFA freed us up to do other things. It was a smooth process—JMFA did all of the work.”

In the end, they both came around quickly when they saw how JMFA worked as their partner in their best interests. “They made it easy. We got better pricing—much more than if we’d done it ourselves,” Long said. “Even if you think you’re getting a good deal from a vendor, you really don’t know. But JMFA does. It was an incredibly positive experience. We will certainly use them again.”

Long also wants to share his success with others so that everyone can benefit. “The more credit unions JMFA can help, the more experience and leverage they bring to the table for all of us. Our credit union will continue to benefit from their collective knowledge.”

Baton Rouge Telco Federal Credit Union’s route to more than $3.2 million in savings started with a straightforward conversation. How much can negotiation experts save you?

Start the conversation by requesting a free appraisal of your vendor contracts up for renewal in the next 18-24 months.